About us:  We are the Democratic party organization for the 24th Legislative District on the Olympic Peninsula of Washington State. Any Democrat is welcome at our quarterly meetings. Sign up for news to be totally up to date, and visit us on Facebook.

To be directly involved with Democrats working in your community, check out the vibrant county Democratic organizations within the district: Clallam, Grays Harbor, and Jefferson. Each has monthly meetings, a newsletter, and other activities. Clallam County also has a Young Democrats organization. (Aberdeen, Montesano, and the southern half of Grays Harbor are in the 19th LD.)

We made dozens of endorsements, and nearly all of our candidates prevailed. 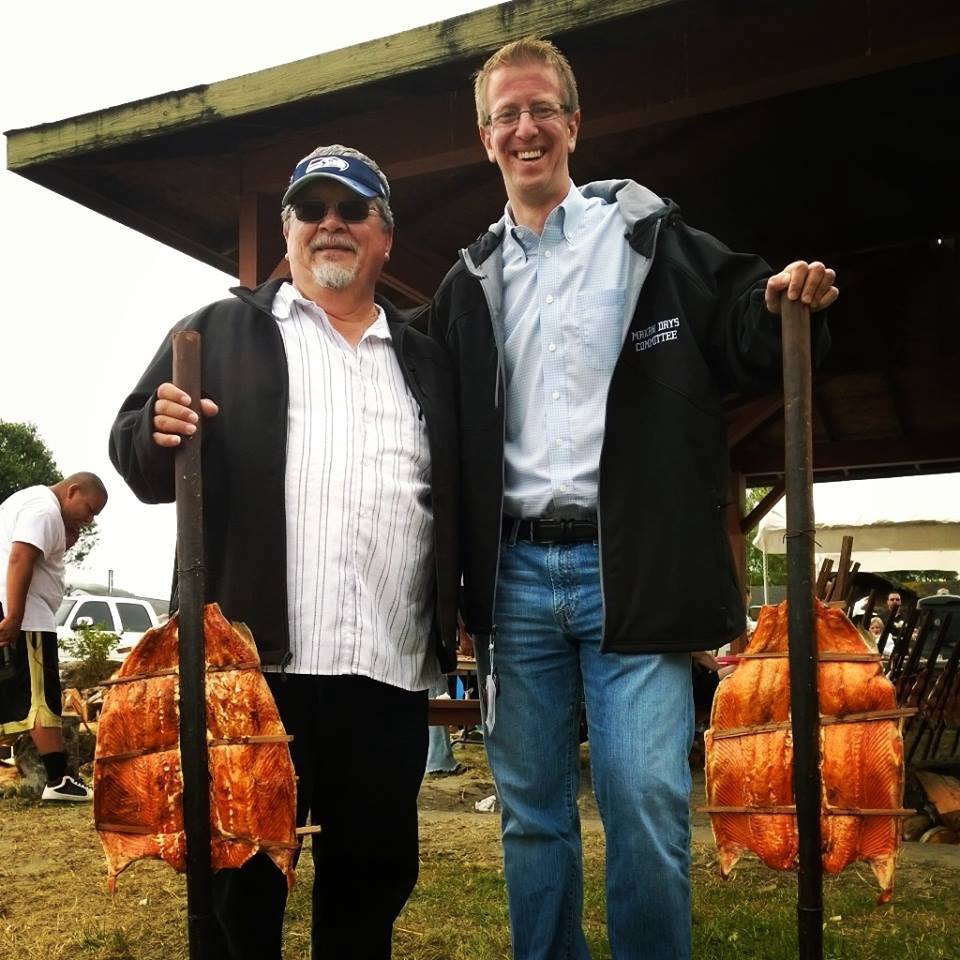 Since 2012, our U. S. Representative Derek Kilmer has been a staunch supporter of Social Security, rural health care, the Wild Olympics, economic development, and social justice. He is in touch with the citizens, organizations, and businesses of the district and he works to support our candidates and our party.

Governor Jay Inslee is a proven leader and we are fortunate to have him. Over the last eight years, our state has prospered and made progress. Our state had the earliest flare up of COVID-19, and his quick response with effective science-based public health measures reduced the spread, saving countless lives. His campaign for president brought climate change to the fore. We look forward to  the progress we can make together over the next four years.

Attorney General Bob Ferguson has looked after the interests of Washington while winning dozens of cases against Trump administration overreach.

Denny Heck will be our next Lieutenant Governor. His steady hand will assure that our state Senate runs smoothly.

Unfortunately, Gael Tarleton, the Democratic challenger for Secretary of State, was not successful. Democrats in the Executive and Legislative branches must press our Republican Secretary of State to strengthen the security of our election system and expand the franchise.

Mike Pellicciotti was successful in his bid to unseat the Republican state Treasurer. We look forward to his administration.

Incumbent state Auditor Patrice McCarthy will continue to head the agency that shines a light on government and what it does. We are fortunate to have a public servant with her qualifications and the experience.

In addition to regulating the insurance industry, Insurance Commissioner Mike Kriedler stands up for consumers on issues like medical billing and health care for all. He chairs the Climate Risk and Resilience Work Group for the National Association of Insurance Commissioners. He has a lifetime of public service. Much more about his progressivism here.

Commissioner of Public Lands Hilary Franz hit the ground running in 2017 and hasn’t stopped. As manager of the Department of Natural Resources and state forest lands, she has led a strong response in a series of tough fire years. She is also working with communities and environmental interests to crate win-win solutions for communities across the state.

In his first term, Superintendent of Public Instruction Chris Reykdal helped secure funding for schools, reinvigorated career and technical training, and worked toward equity and opportunity for all students. He works with local districts as they face the unprecedented demands on staff and students during the pandemic. We are glad to see that he will continue to oversee the state’s schools.

Our Democratic incumbents Senator Kevin Van De Wege and Representatives Mike Chapman and Steve Tharinger will continue to represent the 24th LD in the legislature. All three have long served the interests of our rural communities, securing funding for needed capital projects, stimulating economic growth, and looking after the general health and welfare of all citizens.

We are especially glad to see the election of two state Supreme Court Justices who will bring broader perspective to the court.

Associate Justice Raquel Montoya-Lewis is known nationally as an advocate for juvenile justice reform, equity, and tribal communities. An enrolled member of the Pueblo of Isleta tribe and a descendant of the Pueblo of Laguna tribe, she is the first Native American to serve on the state Supreme Court.

Associate Justice G. Helen Whitener is the first Black LGBT judge in the State of Washington, Whitener is known for her advocacy on human rights, access to justice, and the responsibility of the judiciary to ensure the right of all to basic dignity and respect before the law. Whitener is an immigrant from Trinidad and Tobago.

County Commissioners and other Local Offices

Jamie Nichols, an outstanding candidate, was not successful in her bid for an open seat on the Grays Harbor Commission. Grays Harbor voters also unseated a “Democrat friendly” commissioner, replacing him with a Republican.

Democrats have work to do in Grays Harbor, where this formerly Democratic electorate has been trending toward right wing populism. The next partisan elections are in 2022, when several courthouse positions will be on the ballot with state house seats. Several city councils could use the leadership of people who share our values. Basic political organizing will increase Democratic turnout in Grays Harbor.

With the election of Heidi Eisenhour and the re-election of Kate Dean to the Jefferson County Board of County Commissioners, we see a generational change in its composition. Since 2004, the BoCC has changed from three older male Republicans to three young Democrats and a female majority. We thank Democrat Lorna Smith (dual endorsed) for her candidacy and the contribution it made to a community conversation. Turnout in Jefferson County may reach 90%, the highest since the 91% reached in 2008.

Referendum 90: The voters stood behind the legislature in supporting Senate Bill 5395, despite the cynical campaign of Republicans and the religious right. Republicans may have energized their base by getting this on the ballot, but Washington’s voters supported the legislature on a social issue once again.

Washington State Constitutional Amendment, Approve.  This was a surprising failure. This amendment, which passed the legislature with very little opposition, would have allowed the Long Term Care Trust Funds to be invested in financial instruments, as state retirement funds are. We hope that this item can be returned for consideration with more public education.

Advisory votes, Affirm. Voters seem to oppose this perenniel, costly, and pointless ballot clutter out of habit. These push polls, brought to us by Tim Eyman, give the voters the impression that they can change laws that have already passed. That is what Referendums are for. Perhaps the legislature will, once again, take a look at removing them from future ballots.

Congratulations to all our National Delegates from the 6th Congressional District. At least four of them are from the 24th LD! The Democratic National Convention is in Milwaukee in mid-August.

Our state delegates from LD 24 met in virtual space on June 14 and adopted the Washington State Democrats platform.

Our Democratic values can see us through. We have confidence in science and the capacity of government. We hope to see more action from DC as our advocates work on our behalf. We know that we need to address the health needs of us all as well as those in economic distress.

We also know that we must assure that we elect a Democratic POTUS in November and send Donald Trump packing.